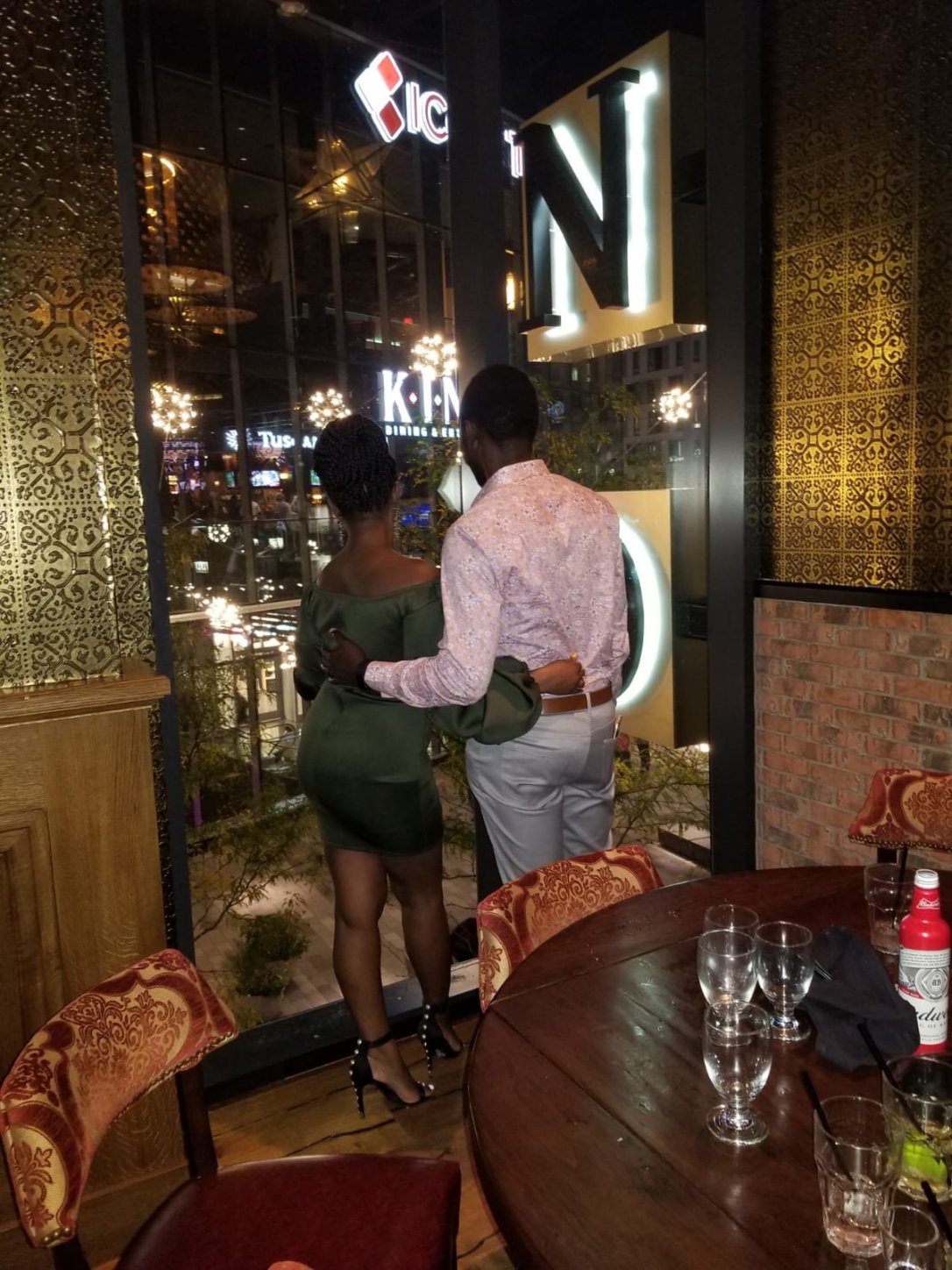 I saw my wife walk by in scrubs the other day. Her head held high, she walked with a sense of purpose, like she had somewhere important to go. I wanted to stop her and hang out for a minute, but I also had a work call to make. The most I could do with her was to exchange niceties, and reassurances of our love. But I could do that on the phone too. So I just sat back and watched her go. For some reason it was refreshing watching her in this setting. She had just gotten off work, and was eagerly getting back to her life, our life. I knew what she was going to do next, and its duration was dependent upon my availability for parenting duty. This was and is still my life. Watching my wife that day was like watching my life train go by. I didn’t board it at that particular station, but I would indeed hop on at the next one. I phoned her and told her that I liked the way she walked. And that it made me feel important, whole, to see someone so beautiful, smart and driven walk back to a life that I was a center of with that much intent and eagerness. Even though brief, it was a moment of bliss. This train would be heading to several moments like that, moments that we live for. Its passage bound to be hindered by several obstacles, but this is not just any train. It’s not powered by regular energy sources, but rather the utopia-charged will power of its occupants. Some call it love. After the Parts Unknown Tangier episode inspired me to dig deeper into the literature on existential nihilism, I will call it purpose, the meaning of life as subjected to my own existence. If you’re in love and are sharing your life with the person that you love, the pursuit of happiness lies in the amassment of these short and sometimes infinite moments of fulfillment. Where I might agree with the nihilists is in my occasional doubts of the existence of a Utopian place where happiness is everlasting. That’s why I’m more inclined to subscribe to the theory that states, “it’s all about the journey, man!”

In the wake of Anthony Bourdain’s suicide, “Tangier” could be perceived as the most insightful Parts Unknown episode because of Bourdain’s repeated proclamation of his undying love for Paul Bowles, an American writer that came of age after he moved to Tangier in the 1950s, a time when notables from the “beat” generation sought it out as the ultimate destination. An International city state of Morocco loosely governed by all the colonial powers of the time, Tangier represented a place where one was free to do as they pleased without consequences prejudicated by the rule of Law, a heaven for the existentialist. As William S Burroughs, a beat pioneer who also moved to Tangier put it at the time, “Tangier is one of the few places left in the world where, so long as you don’t proceed to robbery, violence, or some form of crude, antisocial behavior, you could do exactly what you want.” The beat generation was a literary movement started by a group of authors whose work explored and influenced American culture and politics in the post world war II era in ways that were counter to accepted norms and values. In addition to rejecting the standard narrative values, these writers set out on a spiritual quest that would embrace the inevitability of suffering, the rejection of materialism, sexual liberation and exploration, and experimenting with psychedelic drugs among other things. They were the original existential nihilists, people who believed that life was without meaning, purpose, or intrinsic value. In other words, they believed that all perceived norms, customs and values were subjective and meaningless in the grand scheme of things. Inevitable suffering and the awareness of death are the driving forces at the heart of a nihilist’s way of life. Some nihilists give up on life and the promise of a hard earned future. They give up on participating in the inescapable human search for a purpose, and may even get swept up in destructive mass movements, like the Nazis. Others, like Paul Bowles was, take on a more active form of nihilism. They try to fully utilize their free will to improve the human stronghold in the Universe. They are often the scientists that project us to the moon. They believe that because this life is all there is, one would be best served if they make the most of it, explore and take risks to better themselves. This pursuit may even be in conflict with religious and moral principles, but that would be ok too. The “optimistic nihilist” Youtube video I watched would relay that, “Death is upon us. No one knows what’s to come before and after that. So have fun, do whatever you want. Bonus points if you make someone else’s life better, and more bonus points if you contribute to human progress and development.” Paul Bowles’ life was a testament for this kind of nihilist. One of the most frequently recurring themes in his writing was that of a sophisticated Westerner confronting a less civilized and more primitive society in the quest of self discovery, ultimately meeting their futile end.

Considering his love for Paul Bowles’ body of work and the scope of his own work on Parts Unknown, one might argue that Anthony Bourdain was one of such nihilists. His success as a celebrity chef, writer and later traveler and TV documentarian could be attributed to his quest for value and meaning. His work no doubt contributed to the progress of humanity, and touched many people, including myself. If you watched his show, you would see someone who was enjoying himself and who didn’t hesitate to acknowledge that he was lucky to live a life such as his own. It was a fulfilled life. For anyone else, his life could have been a life worth living through to old age. But Bourdain chose to commit suicide without leaving any note, or forewarning. Could he have decided that he got what he wanted in life, and that he had lived a purposeful life, and added value to the world? Could he have decided that it’s meaningless to stick around after that because life was all meaningless after all? Maybe he decided that there was no need to suffer through old age. We will never know for sure. But we witnessed both his good and bad times. His heroin addiction was well documented in his book. The nihilist in him probably led him down that path. The nihilist’s world is a Godless world where the possibility of committing suicide may not be uncommon. In my world, God created man and woman in his own image, which means that God created us to create. I have come to realize in my limited existence that nothing brings happiness, like creating something. In my case, the creation and constant nurturing of our beautiful young daughter is one of such things. My wife and I were born and brought up as different individuals in different settings, but we came together to forge a life in a foreign country. By being together, we are constantly creating. It has its challenges. but there have been those moments of bliss, not to mention the birthdays, anniversaries and holiday celebrations. Almost nothing makes me as ecstatic as finishing writing a good article. Creation is what it’s all about man! Death might be coming, but in the end it’s those blissful moments leading up to it that matter. Everlasting happiness may be found in the life after this one, a “happyville” called heaven, but happiness in this world will ultimately be realized in those short and sometimes infinite moments that we experience on the different stops on the train ride to that Happyville. If you get off the train on one these stops, or a different kind of stop and don’t get back on it, you could never live to experience more happiness. There might be different trains to Happyville, but in my wife and our child I found mine. And I will experience a lot more happiness with this bunch than any other on a different unknown train.

View all posts by Ivan Kasana